For centuries hammams (loosely translated from Arabic as “spreader of warmth”) have played a significant role in Moroccan culture. Hammams, serails, and rhassouls are all different types of steam rooms or baths used by Moroccans for their traditional cleansing rituals. At least once a week Moroccans visit a hammam to have an Arabian body treatment that involves steaming, scrubbing, and massaging the skin until it is smooth and glowing. In other parts of the world, hammams are also known as Turkish Baths, Roman Baths, Moroccan Steam Rooms or Moroccan Saunas. 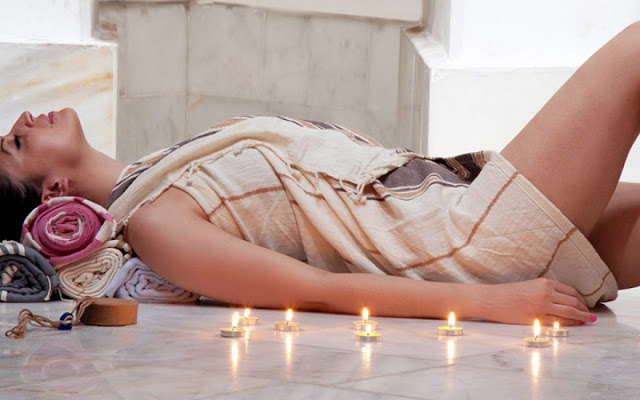 A venerated Moroccan tradition, the hammam ritual spa treatment has endured for centuries and even today thousands of Moroccans still uphold the tradition of cleansing their bodies while socializing and joining in the local gossip. A traditional hammam consists of multiple dry and steam rooms for cleansing the body by another person according to an ancient ritual.

The first public bathhouse was created more than 2,000 years ago by the Roman Empire to encourage their citizens to keep themselves clean and practice good hygiene. The idea soon caught on and Morroco was the first to adopt the practice and turn it into a community ritual. Since religion forms an important part of Moroccan culture, the first hammams were built near prayer houses and it became almost mandatory to visit the hammam before prayer.

Basic Principles of the Hammam Ritual

The principles of the Hamman ritual requires the body to be cleansed from head to toe. In ancient times a visit to the baths started before the cleansing journey as the essential products like the black soap and kessa glove used for exfoliating the skin, and the massage oil first had to be purchased at the souk (market). Today all the essential materials are included in the experience for your convenience and enjoyment.


As the popularity of the hammams grew in popularity they became a gathering point where people from all social classes met to discuss anything they found interesting and share the latest gossip.  The hammam became deeply rooted in the lives of everyone as the central place where important decisions were made like business deals or arranged marriages. Men and women bathed separately and bathers who partook of the purifying rituals were entirely naked. An attendant called a Tellak doused the bathers with water and applied the traditional black soap to the skin to soften before exfoliating with a kessa glove. Sometimes cleansing rituals are done in a community hammam by friends who cleanse each other.

Recent day hammams sometimes allow mixed genders and visitors wear bathing apparel. The conversation consists mostly of light chit chat more than deep conversation. Hammam rituals at famous hotels and spas closely follow the cleansing principles of the ancient tradition. The black soap, La Sultane de Saba, is the same traditional black cleansing soap made in those days from olive oil and crushed olives and infused with eucalyptus for its antiseptic and antibacterial properties and a deep cleanse. The main difference is that the experience is more private, or sometimes shared with a friend. After the ritual, a glass of Moroccan tea is served to restore the fluid balance of the body.

A traditional Moroccan hammam always has the following basic layout:

–    A dry hot room to prepare for the cleansing journey of body and soul and get the body accustomed to the heat.

–    A steam room to encourage perspiration and sweat out the impurities in the body.

–    A bathing room where the traditional hammam ritual treatment will be performed.

–    A massage room for a relaxing oil massage.

–    A restroom to relax and enjoy a cup of mint tea and allow the body to cool down.

When visiting a hammam, expect to spend at least two to three hours indulging your senses and your body in the experience of the ultimate cleansing of body and mind by trained staff.

After being doused with warm water, the ritual starts with an attendant applying a layer of black soap to your entire body to soften the skin and prepare it for exfoliation. You are left in a steam room for about five to ten minutes before being scrubbed all over with a special kessa glove, literally scraping off the top layer of the skin. You will be amazed at the amount of dead skin that comes off during the treatment.

The exfoliation is followed by lots of water, either poured over with a bucket by the attendant or with a shower to rinse off all the soap and dead skin.

A purifying rhassoul mask is applied to absorb impurities from the skin and at the same time feed the epidermis with essential minerals. A period of time is spent in the steam room to facilitate the purging of toxins from the skin and the absorption of the minerals.

In luxurious hammams, the session will end with an invigorating massage with Argan oil to relax the body and remove stress from the mind. The Argan oil will rehydrate the skin, leaving it as soft as a baby’s and glowing all over.

After the ritual, you will be wrapped in a warm blanket and taken to the rest room where you will be given a cup of traditional Moroccan mint tea and left to rest in peace. Many visitors drop off to sleep afterward and the staff will gently wake you after an appropriate time.

In western cultures, some people wear bathing suits, sandals, and a bathrobe to make them feel more comfortable. Most modern facilities will provide the necessary apparel as well as special hammam sandals.

Ending the Ritual in Style

In the most luxurious hammams, they offer sandalwood aromatherapy while relaxing in the restroom. A royal massage with Argan oil will end the ritual in style and relax you completely.

A hammam ritual is suitable for everyone but, like all heat treatments, it is not recommended for pregnant women or people suffering from high blood pressure.

Herbal Ways to Lighten The Complexion
Effective Methods to Remove BLACK AND WHITEheads
Myths About Hair Care
What’s in Your Bag This Summer? Must Haves